I'm sorry Dave, I'm afraid I can't do that

the usual forms of voter suppression (voter purges, gerrymandering, etc) were deemed inadequate by the elite, so they capitalized on this public catastrophe to foist upon the voting populous and entirely new form of voter suppression. One that opened up a whole new world of possibilities for Election Fraud.

Welcome to the Machine

Private companies sprang up out of nowhere to offer districts, counties and states their proprietary "solutions" to the problem of capturing the voter intent.

Black Box Voting was the first to identify and expose the threat posed by these machines. Because the software is propriety, no one is allowed to review the source code for security holes, or malicious intent. And since these machines were created by conservative run businesses, the obvious bias was never fully addressed.

Wally Odell — CEO of voting machine company Diebold — promised that he would help then-President George W. Bush win the state of Ohio in a fundraising letter to Republicans.

New (and improved!) voting machines seem to be generated on the regular by an ever morphing cabal of for-profit companies who still refuse to allow independent examination of their systems.

The latest fashion in these machines is to justify their presence at our polling places by providing a paper "receipt" that shows the voter what the machine recorded. There are several problems with this.

The fact is no machine will every be trustworthy enough for you to give your vote to it.

The only reliable and secure method of recording the intent of the voter is by the voter marking on a paper ballot. Some people with disabilities may require assistance in marking their ballots. It is possible for an open-source machine to be qualified by an independent third party which could mark a paper ballot for them. They would then be allowed to review their ballot prior to casting it. However, the vast majority of voters should be allowed to mark and submit their own ballot into a secure ballot box for counting.

This paper ballot becomes a permanent record of the voting public and the cast ballots can be counted as many times as it takes to verify an election result.

How they are counted -- either by hand or by machine -- is a matter of logistics, timing and cost that can be left up to the district provided there could be an open-source machine to be qualified by an independent third party which will reliably count the ballot markings in a timely manner for a cost effective solution.

This brings us to the next significant failure of these voting machines which is to maintain a robust chain of custody for the recorded votes. Once the file inside the machine is written as either a 1 or a 0, there is very little preventing it from being re-written, or simply erased.

It requires a great deal more stealth and effort to change or hide the existence of a paper ballot when a robust chain of custody is continuously guarding it throughout the life cycle of a cast ballot.

The very first thing is NEVER give your vote away to any of these machines. If presented with a machine at your polling place, DEMAND a paper ballot and don't take no for an answer. If all they offer you is what's known as a "provisional ballot", then take that and follow up after the election to make sure ALL provisional ballots cast, are counted in the total certification.

Better still, opt for absentee ballots or vote-by-mail in advance. If your state offers early voting, then take advantage of that so in case any of these issues (or myriad of others) come up, there is still time to get it resolved before the election.

These links provide insight and guidance on the issue of using voting machines in our elections.

And no one on twitter is a bigger advocate for getting rid of these machines than Jennifer Cohn, you can read more of her watchdog reports at Medium, such as... 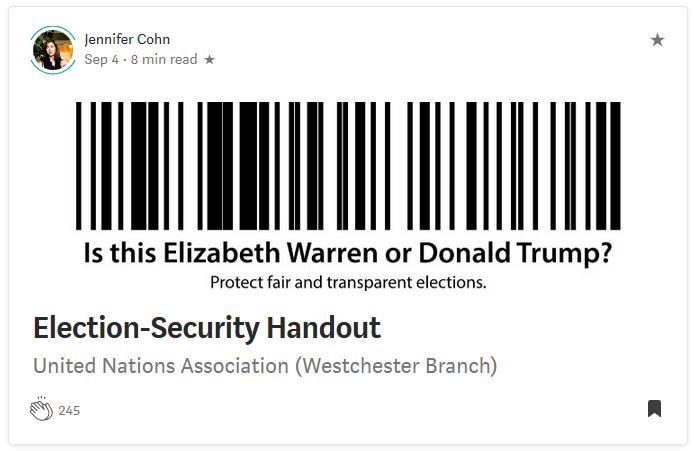